Review of our 2017 Training course

Our atomic force microscopy training course for 2017 ran in April, between the 10th and the 13th. Once again, the course was a great success, and all the places were filled. In this post, I quote some of the the feedback we got from some of me of the attendees, as well as some of the images they produced. In this edition, the highlight (for me) was the talk from Prof. Bart Hoogenboom, from UCL.

Bart demonstrated some amazing results in AFM, and gave some real inspiration as to what AFM can achieve.

Once again, we had a good mix of students. They came from Wales, Portugal, Switzerland, the Netherlands, and Germany. We had PhD students, AFM technicians, lecturers, post-doctoral fellows and industrial researchers. It's always great to have such a wide range of opinions and nationalities!As usual, we began with the basics of AFM, including instrumentation, modes, and fundamental concepts. Then the more fun parts, how to prepare samples, tips and tricks for running the instruments, and how to process and analyse the data.Most of the students prepared samples, and they all ran the instruments and processed and analysed image files. Based on the feed back, the students thought the course very worthwhile.

"I liked the course a lot. I think it's well-adapted to people with no AFM experience, and it seems it works well also for experienced users" 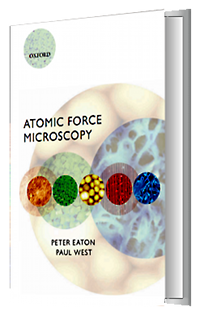 "Atomic Force Microscopy by Peter Eaton and Paul West is the manual that should accompany any AFM."

Peter Eaton and Paul West share a common passion for atomic force microscopy. However, their involvement with atomic force microscopes are from very different perspectives. Over the past 10 years Peter used AFM's as the focal point of his research in a variety of scientific projects from materials science to biology. Paul, on the other hand, is an instrument builder and has spent the past 25 years creating microscopes for scientist and engineers. Together Peter and Paul have created an insightful book on the theory, practice and applications of atomic force microscopes. This book serves as an introduction to scientists and engineers that want to learn about these fascinating devices, and as a reference book for expert AFM users.

The book was published on the 25th March 2010. It can be found at Amazon.com, Amazon.co.uk

, Barnes and Noble, and all major book stores. Click the image on the right to go straight to the amazon page for the book. There is also a Kindle Version

of the book available. If you are affiliated to subscribing institution, then you may be able to access it via Oxford Scholarship Online.

Read more: About the book

I was recently asked what equipment is necessary to set up a new AFM lab, so here goes:

Materials necessary to set up a new AFM lab

Note: Many manufacturers include a lot of these items when you buy an instrument; check before ordering. I have only included estimated prices for items with high cost.

Note: This is the most expensive item, but absolutely necessary. The importance of calibration is discussed in my book (especially Appendices A and B). Take care of your calibration artifact once you have it.

Estimated cost: 300-1000 dollars, depending on model and supplier. Traceable standards will be more expensive.

2. Cantilevers / Probes. Of course these are necessary for all work. You typically get a few with a system, and can also beg samples from manufacturers, but you will need more, and soon! See extensive list of suppliers here:
Where to buy : SPM Probes

3. Anti-vibration solution. There are many different types of vibration-damping equipment, see chapter 2 of my book. They can usually be bought with instruments, but at additional cost. Suitable vibration / acoustic isolation stages for AFM instruments can cost from 2,000 to 10,000 dollars.

I often buy from Ted Pella, see here for probe tweezers, and here for type 2A, but most microscopy suppliers carry these, or some equivalent. Note: on a budget, type 2A also can be used for probes, but I highly recommend that you keep a clean pair of tweezers, especially for handling probes.

5. Sample mounting discs. These are simply magnetic steel discs of about 10-15 mm diameter, and 1 mm thick. You can even make them yourself. Most microscopy suppliers sell them in tubes of 50-100. See here for the ones at Ted Pella.

6. Sample mounting adhesive tabs. To stick your sample onto the metal discs (above). See here for example at SPI. Alternatively, can be easily replaced with double sided sticky tape with few problems.

7. A source of very clean water. Some labs use milliQ water, and this is fine for most work, but you can also find ultra-pure bottled water, which I mostly use. See chapter 4 of my book.

8. A source of clean gas. Used for removing dust from samples. At a pinch you can use a “blower”, like this: Rocket Air Blaster

9. Adhesive for when double-sided sticky tape is not enough: 2 part epoxy is the gold standard, superglue (cyanoacrylate) can also be used, but not for work in liquids.

11. Optical microscope and / or magnifier. Usually AFMs have an integrated optical scope, that can be used to obtain optical images of the sample. Depending on your application, and how good the attached scope is, you may want a separate optical microscope to view samples before putting them in the microscope and possibly to record good optical images. This can help greatly with sample preparation. It is also VERY useful to have a magnifier or small microscope to help with probe seating, i.e. to make sure your probe chip still has a cantilever and that you have placed it in the probe holder of the AFM correctly.

12. Other susbstrates. Depending n the kind of work you need to do, you will want substrates to deposit your samples on. These might be optical glass slides, coverslips, mica, or HOPG. flat silicon samples can also be useful. Most AFMs work with 1cm diameter samples or smaller.

For the room you are going to put the AFM in, there are not many real “must-haves”. But it’s recommended you use a small lab, with little foot traffic, or at least one where the people can be expected to keep quiet. Basement labs are preferred to upper stories. These are all due to vibration and acoustic noise issues. It’s useful to have air-conditioning, especially if you expect to have large temperature variations during the day. But you must be able to turn this off in case it interferes with high-resolution work.

As always, suggestions and additions to this are welcome - go HERE for the contact form.

Do I need an expert for my AFM?

Does an AFM need to be have a technician responsible for it?  Or a senior scientist who can train others to use it? In many research labs, the answer seems to be “no”. Or at least, there is no-one fully responsible for the AFM, who can advise on experiment design, sample preparation, and train users, or even just run users’ samples. In this blog post, I’ll talk about why this situation exists, and what should be done about it.

In research labs in academia, (and, to a lesser extent, also in industry), there are often two kinds of facilities, those that are operated by individual researchers, in their own projects, and those that are run either ONLY by technicians /senior scientists, or only by fully qualified researchers under the close supervision of an expert. For example, in chemistry, a common instrument that is usually left to researchers (such as students) to run by themselves, is a UV/visible spectrometer. This is a pretty simple instrument, that is kind of a “black box”, which requires minimal training to use correctly.This is not to say that some things cannot go wrong, but an occasional prod in the right direction is all that’s required. Typically, if any-one is responsible for the instrument, they often just change the bulb now and again. More complex instruments are often run the same way, up to optical microscopes. But this is not the same for nanometre-resolution microscope, right?

Electron microscopes are *rarely* solely user-operated. They nearly always have a technician responsible, who might be the only one to use the microscope at all. When I began to use electron microscopes, it was clear that I was not going to get my hands on the instrument, until after a very thorough training lasting several weeks, and costing a lot of money. After this, I used the instrument for a long period of supervised operation, before finally being considered independent. This makes sense, for several reasons:

So, what about the AFM? Doesn’t all this hold true for an AFM?

Surprisingly, there are many many cases where AFM instruments do not have a responsible user, let alone a technician. In the AFM training course I teach, something like 50% of the people who need training say there’s an AFM in the lab and no-one knows how to use it.

There are many AFM instruments sitting in lab corners, barely if ever used, or used only by un-trained students.

So, why is this? All those bullets points up there kinda hold true for AFM, don’t they? I think they mostly do, but I think the difference is in the last part.

An AFM can be a low-cost instrument! And an AFM might be very small indeed...which will often lead to the erroneous idea that it’s a simple instrument to use. Is AFM more difficult than electron microscopy? I don’t think so, but most electron microscopists seem to think so. Then again, perhaps this is because they’ve never been trained properly in use of an AFM.

Let’s look at cost; here’s a rough idea of what it costs to get an instrument with 1 nm resolution:

NOTE: These are “typical purchase costs”, and any of them might costs more or less than this, but not by an order of magnitude….

Now, these 3 instruments would not be the same, and I am not saying a 40,000 dollar AFM can do everything a million dollar electron microscope can do, but with these three instruments, you can achieve around 1 nm resolution. To explain what you can really do with them could make another looong blog post...

But, wow, it’s a big difference, isn’t it? Add to this the fact that a TEM takes up an entire room to itself, and may even need the ceilings raised to fit in (and it usually won’t fit through your door, either!), and you can start to see why sometimes people take the TEM or SEM more “seriously”...If you have to raise a million dollars in funding to buy a microscope, you are going to make damn well sure that a: It’s not broken by incompetent users, and b), that you get some money back to keep it going by selling services.

So there we have our poor little AFM, it’s the new kid on the block, electron microscopists don’t understand it, and no-one ever gets properly trained. Some AFMs are actually installed by technicians who don’t know how to used it.

So what can you do?

All of these are difficult, but check out our training courses here: http://afmhelp.com/course

I would be interested to hear what other people think about this, it’s something I’ve been telling people a long time, and no-one has contradicted me (audibly) yet! Do people out there who can use  AFMs and EMs think one is more difficult than the other? Modern electron microscopes are also highly automated, partially due to more mature technology, and partly, I guess, to justify their high costs!What do you think?

Incidentally, if you need an AFM expert in your lab after reading this, I am looking for a job! Check out my CV here! ;-)