In this chapter, common problems in AFM images are discussed. Some of these artifacts are inherent to the technique, and are impossible to avoid. Others depend on the particular instrument used, or the properties of the probe selected. Some are due to imaging parameters, and can be easily avoided. In each section, the artefact is described, the reason for the appearance of the artifact is discussed, and steps that can be taken to avoid it are given. In nearly all cases, there is an illustration of the artefact in a real AFM image.
Take this test to see if you can recognise and understand the reason of, common AFM artifacts, and realise how they can be avoided.

1. Which of these two images was taken with a sharp probe? 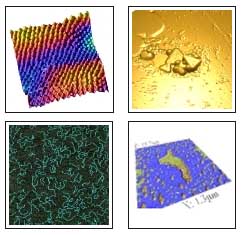 The image gallery section has been removed for now. I hope to replace it soon.